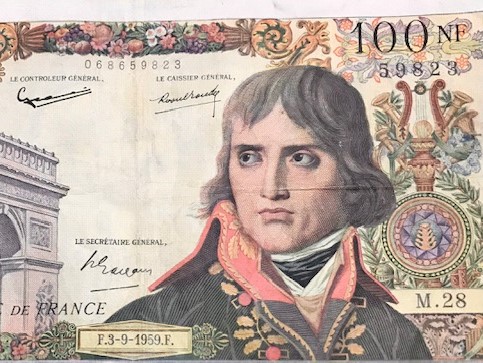 Two hundred and fifty years ago, on August 15, Napoleone di Buonaparte was born in the small city of Ajaccio in Corsica. He later changed his name to Napoleon Bonaparte and became a leader who not only changed the face of Europe but also of the Middle East.

French ties with the Levant are rooted deep in history, mixed with blood and tears, but they have also been embellished and enhanced by literature, science and poetry. Books about Egypt, including those by Claude-Étienne Savary, an Orientalist and a pioneer Egyptologist, and Constantin François de Chassebœuf, Comte de Volney, were very popular. In the book, Lettres sur l’Égypte (1785), Savary provides an account of his journey, including a study of the region’s religion and mythology. While Savary’s accounts depicted Egypt as a paradise, Volney described a more realistic interpretation of Egypt in his Travels through Syria and Egypt.

In December 1797, as a 29-year-old general, Napoleon returned victorious from his campaign in Italy, but England remained the principal enemy. The French Directory (the French Revolutionary government from November 1795 to November 1799) wanted to declare war on England and march on London, but did not have the resources to achieve that ambitious goal. It seemed easier to fight British influence in the Levant, so Napoleon was requested by the directory to test the power of the British Army by cutting its communication lines to India and damaging its trade route eastward. France couldn’t fight the British in England, so it fought them in Egypt.

Indeed, in May 1798, Napoleon set out to Egypt with the Armée d’Orient, including 40,000 soldiers, 10,000 sailors and 800 horses. He led the expedition aboard L’Orient, the 120-gun flagship of the Escadre d’Orient, a fleet of 55 warships tasked with the operation, sailing along with 300 transport ships departing from various French ports. Only a few knew the secret destination of the campaign, among them the scholars Gaspard Monge and Claude-Louis Berthollet.

Although the purpose of the campaign was primarily political – to drive the English out of the Middle East and weaken their trade – the military expedition also had indisputable scientific and cultural aspects. On these specific points it proved to be a success, and for many it helped to shape the oriental myth of Bonaparte. The French statesman and military leader commissioned a delegation of more than 160 intellectuals to accompany the French Army to Egypt. Caffarelli du Falga, who perished during the siege of Acre, commanded the delegation. Caffarelli’s tomb was discovered in 1969 in a small cemetery near the Galilee College. Napoleon also brought a library on board from which he sourced the three holy books he read during his journey at sea.

At an early stage, Napoleon decided to establish a scientific institution in Egypt, following the model of the National Institute of France (of which Napoleon was a member). Soon after reaching Cairo, and after the July 21, 1798, Battle of the Pyramids, he directed Berthollet and Monge to establish what would become the Institute of Egypt.

The scholars of the Napoleonic Egyptian Scientific Expedition documented and researched all aspects of Egyptian civilization, ancient and modern alike. They produced a vast amount of knowledge, condensed into a monumental work called Description d’Egypte whose first volumes were published in 1809. The work was finally concluded in 1828, and a total of 23 volumes were included in the first “Imperial” edition. Three of these were the largest books ever to be printed, standing over one meter tall.

The complete set contained 837 engravings, many of them of unprecedented size, capturing Egyptian culture from every possible angle. Napoleon’s campaign can be followed due to the survey conducted by his geographers, such as Colonel Pierre Jacotin. Napoleon also has had a group of military geographers who produced clear maps of Egypt and the Holy Land, with names and locations in both French and Arabic. He was a master map reader, and knew how to extract relevant information he needed for battle planning from the 2D map.

The first city the French forces encountered during the campaign was Alexandria, founded by Alexander the Great. The city was famous because of the Lighthouse of Alexandria, one of the Seven Wonders of the Ancient World, and because it housed the most extensive library known at the time.

Napoleon conquered Egypt. His forces marched 12 hours every day, sometimes in the burning sand. Suffering from the heat and lack of water, soldiers collapsed and died. Blinding sunlight also took its toll as some soldiers went blind. Morale was usually low, and scores of men developed diseases such as dysentery and bubonic plague.

Following the Ottoman declaration of war on France in September 1798, and facing an Anglo-Ottoman alliance, Napoleon decided to preempt his enemies by striking first. He led his army into the Holy Land, known at the time as Syria, to disrupt any possible Ottoman action against Egypt. He led 13,000 French soldiers into the Holy Land, defeating on the way Mamluk, Arab and Turkish forces, and taking over the coastal towns of El Arish, Gaza, Jaffa and Haifa. Napoleonic massacres in Jaffa put a dark stain on his legend.

They fought along the Mediterranean coast and aimed to take Acre from Jezzar Pasha, but he refused to surrender. French infantry offensives on the city were repelled, forcing Napoleon to lay siege. Jezzar Pasha withstood the siege for one and a half months. During the long siege of Acre, Bonaparte made sure to secure the surrounding areas and went a step further, sending forces in an attempt to gain the allegiance of the Arabs in the Galilee. To add to these complications, the Ottomans sent troops to raise the siege. Gen. Kléber was tasked to repel these forces, and despite being heavily outnumbered, he inflicted a crushing defeat on the Ottomans at the Battle of Mount Tabor on April 16.

During the siege, Napoleon’s forces ventured inland as far as the Golan Heights under the command of Gen. Murat. The forces reached Nazareth, Safed and the Daughters of Jacob Bridge on the Jordan River, aiming to block the incursion of Ottoman armies.

On April 2, 1799, Murat was ordered to conduct reconnaissance in Safed and the surrounding area to find out whether the Ottomans were sending reinforcement across the Jordan River. On April 13, 1799, Murat received new instructions from Napoleon to cut off the Ottoman communication lines from Damascus and prevent any reinforcements that could threaten his troops in the Holy Land. Napoleon had just learned that 1,200 enemy cavalrymen had crossed the Jordan River and besieged the fortress of Safed.

Murat’s forces seized the Daughters of Jacob Bridge on the road to Damascus, as well as Safed and Tiberias. On April 15, Murat defeated about 6,000 enemy troops without a loss. On April 16, he was already on his way to Tiberias. In Egypt, Napoleon was famously quoted as saying, “From the heights of these pyramids, 40 centuries look down on us.” From the heights of Mount Hermon, one could witness the world’s first empire built by Sargon the Great (Sargon of Akkad) five millennia earlier, rising to great power while conquering Mesopotamia and parts of Syria, Iran and Turkey.

It was from there that the Ottomans watched the movements of the French forces. This was not the first time the French troops took or crossed the bridge. Back in 1170, Frankish crusaders built the castle of Vadum Jacob or ‘Le Chastellet’ (Metsad Ateret in Hebrew), a fortress on the Jordan River, not far from the bridge. French soldiers also fought and crossed the bridge alongside British forces during WWI.

In the end, Napoleon wasn’t able to take Acre, and he lifted the siege on May 17, 1799, returning to France via Egypt. On the way back, his forces were severely hit by bubonic plague. The famous painting of Antoine-Jean Gros, Bonaparte Visits the Plague Stricken in Jaffa, depicts that dark episode. Regardless, his defeat of the first Ottoman Army of Syria at Mount Tabor on April 16 allowed him to march triumphantly into Cairo on June 14.

That historic episode and the situation today remind us of the constant instability of the Middle East. Over the centuries, the region has been a magnet for foreign interventions, rarely reaching unity. Napoleon helped to understand the past through his scientific discoveries but had difficulties grappling with the challenges of his time.

We have similar challenges today. Global powers like Russia, the US and China are competing for influence in the Middle East. France, Britain and the Ottomans fought back then for the same reasons. As can be seen through Napoleon’s campaigns, Israel’s northern border invites great challenges and hardships. It is known to be a difficult and challenging military theater. This has been true for millennia: 2,000 years ago during the Hellenistic period’s Syrian Wars; 1000 years ago with the Crusades; 200 years ago with Napoleon; 50 years ago with Syria; and today with Israel’s campaign – in-between wars – against Hezbollah and Iran.

Basaltic rocks near the Jordan River